We’ll waste no time and just get stuck in, we know you are busy people. The following list is not a top ten or in any particular order. So without further ado here is our list of the craziest construction project proposals in history. Feel free to add your suggestions in the comments below.
Originally proposed in the 1990’s, the Freedom ship definitely qualifies as one of the craziest construction project proposals ever. If realized, this would have been a self-sufficient floating city replete with all the trimmings you’d expect. The giant vessel would have been able to traverse the world in two years. Its design included catering for a population of around 50,000 with its own independent economy, jobs, schools, and shops. The ship would be so large that it couldn’t actually dock in conventional docks and residents would travel to the mainland via the top deck airport. Its failure included the cost, technical difficulties and ultimately lack of interest from potential citizens. What an outlandish and bold idea, kudos!


Another example of the craziest construction projects, the Shimizu Mega-City Pyramid, would have housed around one million people. The proposal was to build a floating city in Tokyo’s harbor that would so big it could house 100-storey skyscrapers inside it. Whilst logically sound, especially for an overpopulated city like Tokyo, the technical difficulties ultimately spelled its doom. The design was to make the pyramid of up to five trusses stacked on top of one another, each about the size of the Great Pyramid of Giza. Whilst unrealized, this is something straight out of sci-fiction and remind the author of Hive Cities in the Warhammer 40,000 Universe, only on water! We make no apologies for the “geek out” moment!

Our next entry on our craziest construction project list does make complete sense in the long run. Ever rising populations and ever reducing land available for farming leads to an obvious solution. Farm upwards! The general concept is to farm on skyscraper type structures and many of them are pretty avant-garde. If realized these types of structures could greatly reduce the pressure on food requirements for bulging city populations and reduce or prevent the need for costly and wasteful transportation of food around the globe. Proposals include the Dragonfly in New York City. To date, our ability to build such structures is yet to catch up with mankind’s ambitions. 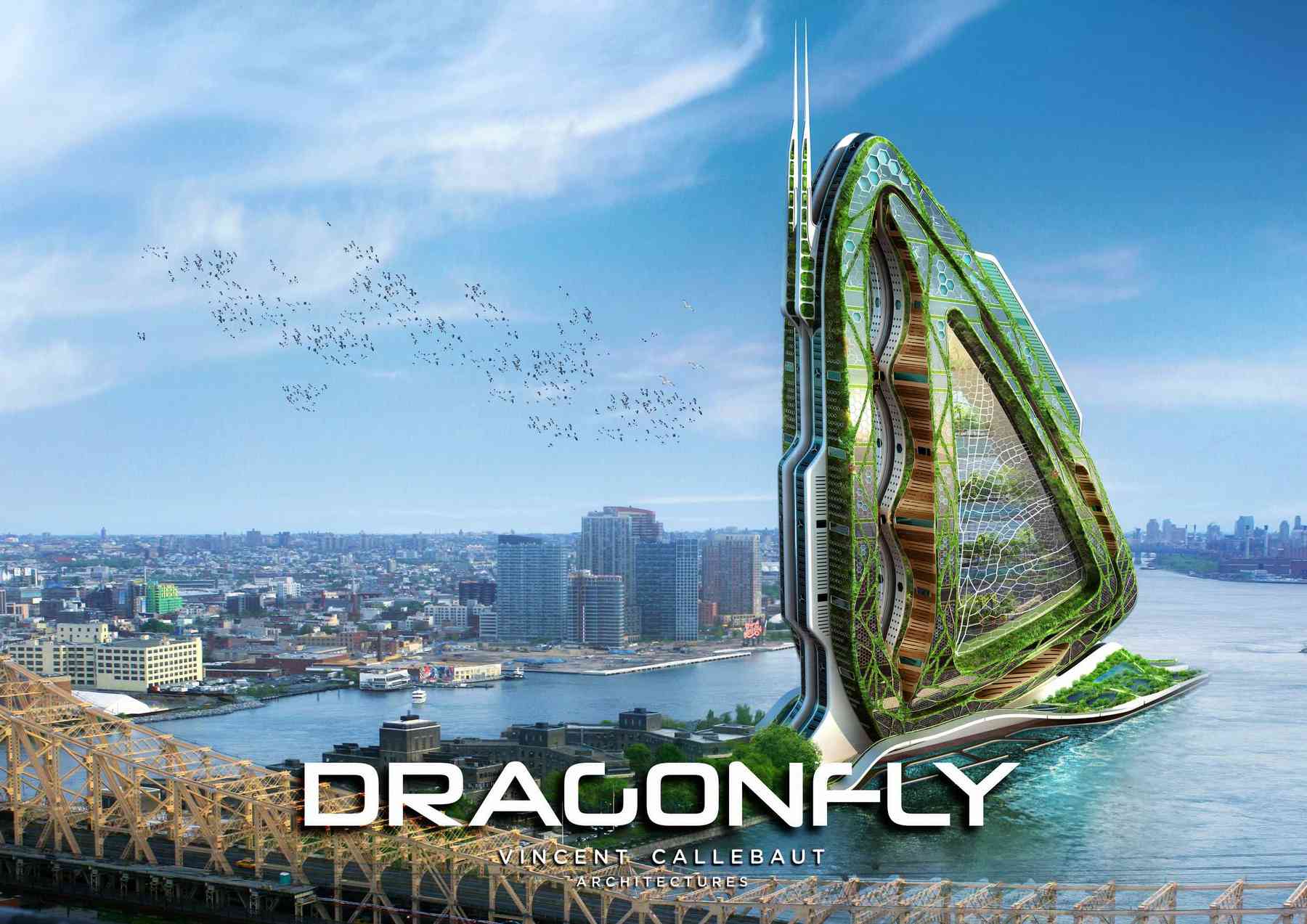 [Image Source: Vincent Callebaut Architectures]
We are all familiar with those memes saying “meanwhile in Russia” which are usually very amusing but here is a real example of one of the craziest construction projects. In 1992, Nikolai Sutyagin couldn’t be satisfied with the size and scale of his home. So under-awed was he that he couldn’t help but keep adding on extensions. For most, this would be a conservatory but Nikolai took it to the next level, literally. This seems to have become an obsession as he kept adding and adding. It is currently the world’s tallest wooden house and looks like something out of a Tim Burton film.

The 1930’s were an interesting time in so many ways. In the later part of the decade, a proposal to build a 700-meter tall tower with a road was proposed. Resembling something akin to a barber pole with a road, the top of the tower would have had a hotel which you could drive around the tower to reach and park up. Apparently, the tower would be able to accommodate up to 400 cars and also had a restaurant sandwiched between the hotel and the garage! No pun intended, ok it was! 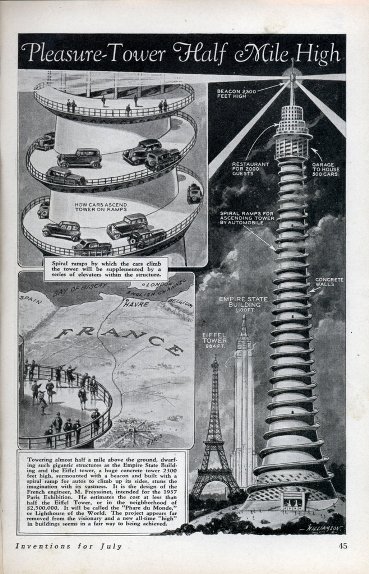 [Image Source: Imgur]
We aren’t done with Paris just yet, sorry guys we love you really. Paris certainly isn’t immune to the craziest construction project proposals. Although the 1930’s were interesting, for Paris this seems to have extended back another decade or so. Can you imagine plans to demolish a large portion of the city of Paris and rebuilding it with 18 glass towers connected by a subway? Now imagine those structures surrounded by a garden city? Got it? Good, that was Plan Voisin. The idea was to house most of Paris’s businesses in these structures and at the time the city was in a bit of state.
Thankfully the plan wasn’t realized, though it would have been interesting to see the French people’s reaction to such a proposal. We do however respect the architect’s vision, he was only about four decades early from similar projects of the 1960’s, well in the UK at least.

Yep, you read that right! But temples are for… look forget about it, it was never considered. Although technically this could easily be built, the project seems to have been canned since its proposal in 2012. The idea was to build a “temple” to atheism in London with plans for more around the world. Although the principle might grate on actual atheists, the design makes a lot of sense. It was intended to be 46 meters high, representing the 4.6 billion years of the Earth’s existence. There were plans to have a single band of gold at the base to represent the extent of the age of man. No clear plans were made for the building’s actual use but when has that ever stopped a construction proposal? The author suggests using it as a Jedi Temple, but he’s a little silly.
Excavation using chemical explosives or machines to slow for you? The obvious alternative is to use some nukes right? Right. During the late 1950’s the US had plans to build a harbor in Alaska using Nuclear explosions. Hey, why not? apparently, it was a gambit to show the world that this new technology can be used for “good” rather than “ill” in the world. Oke doke!

So there you go! Our list of some of the craziest construction project proposals in history. Food for thought, we do hope you enjoyed our humble list and we welcome any other suggestions.
Sources: Listverse, WonderfulEngineering, Oddee, CityMetric
Featured Image Source: FreedomShip