Local 28 Sheet Metal workers register for the COVID-19 vaccine at a vaccination site at Belmont Park in Elmont, NY. Photo: AP
Readers sought out ENR’s breaking news coverage and in depth analysis of many topics that impacted the construction industry throughout 2021. The COVID-19 pandemic continued to weigh heavily on readers’ minds and affected business activities, but there were also several engineering failures that garnered much attention. As we say in the news business: don’t bury the lead. In that spirit, this Top 5 list is presented in order of the stories that received the most page views in 2021. 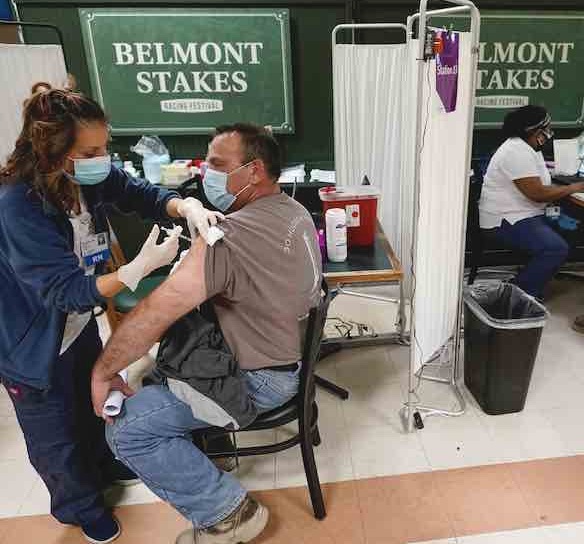 A Northwell Health nurse inoculates a Local 28 Sheet Metal Worker with the first dose of the COVID-19 Pfizer vaccine in Elmont, N.Y. (AP Photo/Mary Altaffer)
AP
The U.S. Occupational Safety and Health Administration’s emergency temporary standard to require vaccination or weekly testing for all employers with 100 or more workers, as well as President Joe Biden’s executive order mandating vaccinations for employees of federal contractors, received the most views of any story topic in 2021, with well over 300,000 page views.
One of the earliest articles from May 3 on OSHA’s vaccine guidance became ENR.com’s top read single story of the year, partly due to the link being shared on both pro-vax and anti-vax websites and social media accounts.
The story continued to evolve throughout the year, with ENR editors Jeff Yoders and Debra K. Rubin following the legal twists and turns. “While the Biden administration asking for and receiving an emergency temporary standard from OSHA to mandate vaccines was expected to be more straightforward, its rollout and legal back-and-forth made the vaccine mandate anything but,” Yoders says.
The most recent news development came just days ago as the OSHA standard legal battle finally reached the U.S. Supreme Court, as expected. Justices on Dec. 21 set Jan. 7 for a special session to hear oral arguments on whether or not they should grant an emergency stay of the rule or allow it to be enforced as they weigh its broader legal merits. 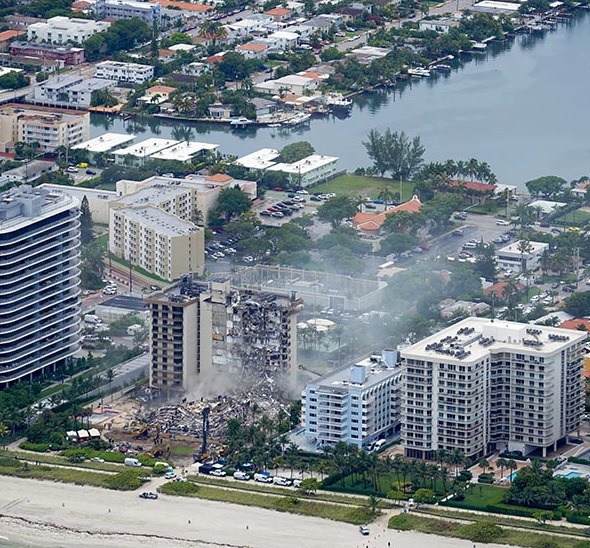 Causes of the collapse in Surfside, Fla., are still under investigation.
Photo: AP Photo/Gerald Herbert

The series of stories detailing the June 24 partial collapse of the 40-year-old Champlain Towers South residential condominium in Surfside, Fla., showed that the disaster that took 98 lives weighed heavily on the minds of engineers and others in the construction industry.

From early articles during the first hours and days of the collapse to later stories on the expanding examination of other aging properties in the surrounding area, ENR’s buildings editor Nadine M. Post succinctly explained the evolving theories and potential future impacts to building construction and maintenance. Post, along with Southeast editor Scott Judy, also reported on the continuing investigation by the U.S. Dept. of Commerce’s National Institute of Standards and Technology (NIST) in October. 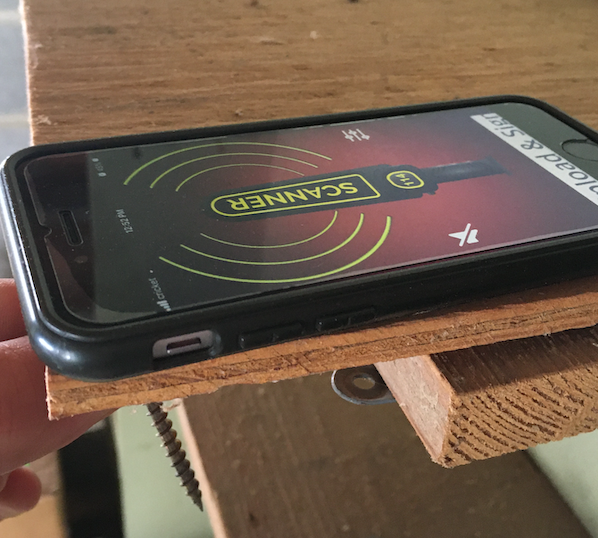 There are many iPhone stud finder apps, but some work better than others.
Photo by Luke Abaffy

Articles advising readers on how to optimize their iPhones to detect studs in walls remained some of ENR.com’s most popular stories in 2021. Interestingly, ENR’s original 2013 article on the technology remains popular with readers, but technology writer Luke Abaffy provided an updated article in February with an overview of 16 stud-finding apps for modern iPhones. 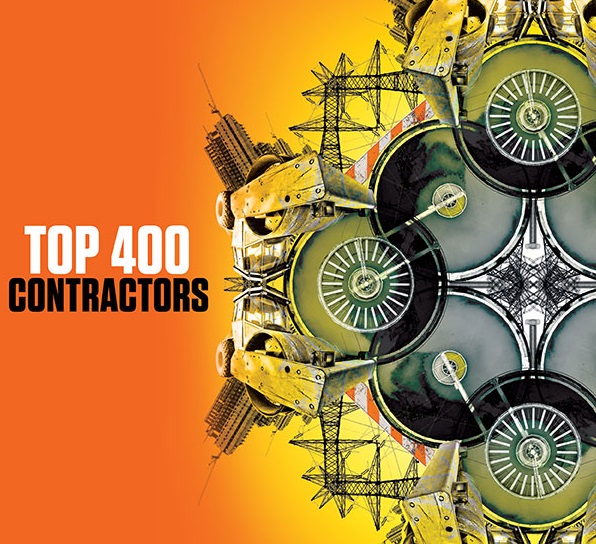 For decades, ENR has provided perennially well-read annual rankings of the Top 400 Contractors, Top 500 Design Firms and Top 600 Specialty Contractors in the U.S. Fast developing issues in 2021 of sustainability, climate change and global pollution also generated more interest in the Top 200 Environmental Firms ranking, which includes non U.S.-based companies, and the Top 100 Green Firms lists for design firms and contractors. In addition, ENR’s international rankings of the Top 250 Contractors and Top 225 Design Firms brought thousands of views from around the world. 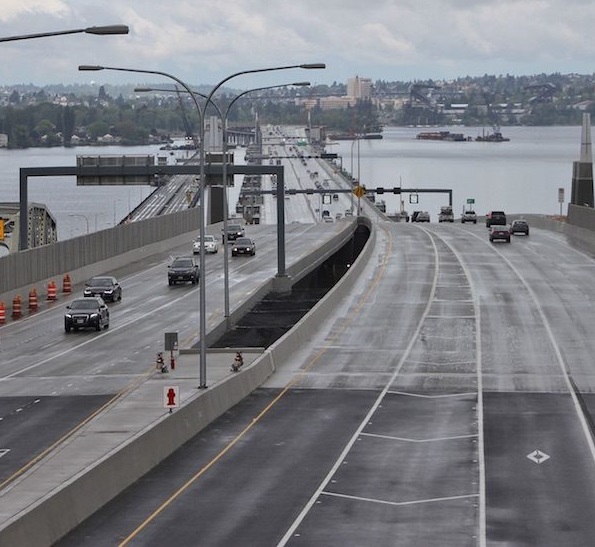 It is perhaps a bit meta that ENR’s top 10 lists would end up on an ENR top 5 list. ENR editor Scott Lewis has been producing online-exclusive rankings of world record-breaking construction projects that readers continue to seek out. Many of this year’s most viewed top 10 lists were published years ago, including the 10 longest floating bridges in the world, published in 2018 with nearly 20,000 views in 2021. Other popular lists included the 10 largest drinking water treatment plants and the 10 largest base-isolated buildings in the world. 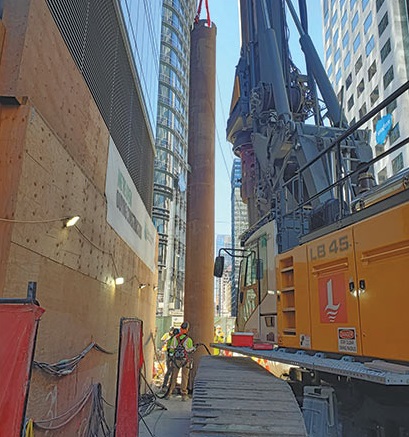 Buildings editor Post followed the ups and downs of the Millennium Tower fix in San Francisco, which aims to install piles to reduce settlement of the 645-ft-tall residential condominium. The 58-story tower, which remains occupied, has sunk a total of about 17 in. since its completion in 2008.
After a perimeter pile upgrade had been performed earlier this year, settlement actually accelerated and the plan was halted. A revised scheme proved successful, and just before the end of the year, the engineer for the $100-million upgrade proposed a reduced scope with fewer piles.

Blair manages day-to-day operations of the ENR editorial team to ensure brand quality, further best practices and support the editor-in-chief. He spearheads ENR's various competitions, including Best Projects and the Award of Excellence, and organizes editorial content at events including the Top Young Professionals conference. A Jesse H. Neal, Construction Media Alliance and AZBEES-award-winning writer and videographer, Blair frequently contributes to ENR’s burgeoning video channel with project tour videos and interviews with industry leaders. He is also a frequent speaker and moderator on topics such as diversity and inclusion, design and jobsite technology, construction means and methods and marketing.

Getting a grip on the data moving through a project takes more than spreadsheets and off-the-shelf project management software. You’ll learn how to effectively build a data-driven culture in your organization, hear tips on embracing a data-driven approach to construction, and learn to build on past project successes to gain a competitive edge in the future.
Sponsored by:

It’s common to see multiple point solutions or multiple environments of a single program management information system being used to manage projects within a program. But this leads to data silos, making it difficult to keep everyone on the same page. Experts will share how they’re successfully managing complex programs within a single platform.
Sponsored by: