IAS Yashni Nagarajan is one of those IAS officers who help the aspirants with her articles and blog. She has given many success mantras to her followers where she showcases the importance of Optional, essays and ethics papers.
UPSC Exam is not an easy exam. The reason is quite simple. The syllabus is vast and requires any candidate to make witty choices. The exam allows just six attempts for the aspirants. Maximum candidates fail in the UPSC Civil Services because they were too stubborn to change their optional or previous strategy. However, the candidates who change their approach at the right time score better and succeed in becoming IAS officers. Such is the story of IAS Yashni Nagarajan. Check her UPSC success story below.

Yashni Nagarajan was born and brought up in Arunachal Pradesh. Although her roots were in Tamil Nadu, she spent her childhood in Arunachal Pradesh. She studied in Kendriya Vidyalaya, Naharlagun. Yashni’s father, Tangavel Nagarajan, was a state PWD engineer.
Her mother was a Superintendent of the Itanagar branch of Guwahati High Court Registry.
Yashni was a good student since childhood. In 2014, she completed her graduation from the National Institute of Engineering, Yupia. Yashni spent four years studying Engineering (EEE Branch). Her parents always encouraged her to take up UPSC Civil Services.
UPSC IAS 2022: Managing Father’s Ill-Health & Cracking Civil Services Exam: IAS Ritika Jindal’s Success Story
Yashni runs a blog herself to help the aspirants of UPSC Civil Services. She says, “I have appeared in CS Examination four times. Gave mains thrice, reached the interview stage all three times and made it to the coveted list twice, this time with a double-digit rank.”
Yashni started her UPSC preparation after her college. She tells this in her blog. She was asked if she began UPSC preparation in college. She replied, “After college only, before that, I didn’t even have many ideas about the exam. If you are a beginner, Start with newspaper and NCERT reading.”
After graduation Yashni got a job at the Reserve Bank of India. She prepared for UPSC CSE while doing a full-time job in RBI. 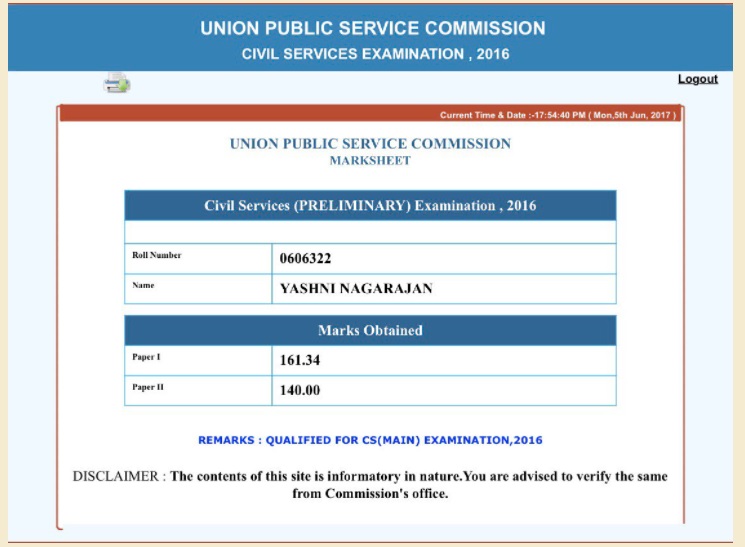 Yashni chose Geography as the optional subject in her initial attempts. She, however, said that she chose the optional under the influence of others. Yashni began studying for 4-5 hours every day. She utilised her weekends as well. Yashni believed that studying on weekends in case you are employed in a full-time job is essential. She credits her UPSC success to her time management skills.
Yashni failed in her first attempt and understood that Geography as a subject is not suitable for her. She says, “Optional Subject plays an important role in making you an IAS.”
She also says that scoring high marks in Ethics and Essay exam helps candidates raise their overall scores and secure a better rank in UPSC CSE.
She says that it may be difficult for candidates to prepare for UPSC along with a full-time job but it can be beneficial for aspirants. “You will not feel stressed even if you fail in UPSC when you already have a job.“
Yashni succeeded in her second and third attempts but could not get a better rank. She succeeded in her fourth attempt in UPSC Civil Services 2019. She secured 57th rank in the exam.
She got the AGMUT cadre which is Arunachal Pradesh, Goa, Mizoram and Union Territory Cadre. She joined as Assistant Deputy Commissioner (Trainee) in the East Kameng district of Arunachal Pradesh.
Yashni runs her own blog through which she helps the IAS aspirants. She says, “In my journey, I have made many mistakes and maybe that’s why it took me quite some time to reach here. So the following is my learning from the mistakes I have made and observed others make.”
Candidates can follow her blog as well to see her answer scripts and read her articles.  Yashni’s success story can be taken as an inspiration by all UPSC CSE aspirants.
Read|
UPSC IAS 2022: How A Married Woman With Full-Time Job Became A UPSC Topper? IAS Kajal Jawla’s Success Story